Laser systems often use a pinhole aperture called a spatial filter. Spatial filtering is a technique used to improve laser quality by removing higher-order modes and noise in the beam. To accurately model laser propagation through a spatial filter in FRED, it is important to re-synthesize the light field just after the filter. Doing so will accurately model clipping at the aperture. In this note, a light synthesis technique called Gabor decomposition will be described.

Modeling coherent light in FRED is accomplished using a technique called Gaussian Beam Decomposition (GBD). The light field is divided into individual Gaussian beamlets that propagate coherently with respect to each other. Each beamlet is represented as a set of rays (Figure 1). The base ray is traced along the axis of the beamlet. Eight secondary rays are included: four orthogonal secondary waist rays representing the beam waist, and four orthogonal secondary divergence rays representing beam divergence. During a raytrace, the base ray determines the fate of all secondary rays: if the base ray passes through an aperture, for example, all secondary rays must also pass through the aperture. This technique of representing Gaussian beamlets using rays is called complex ray tracing. 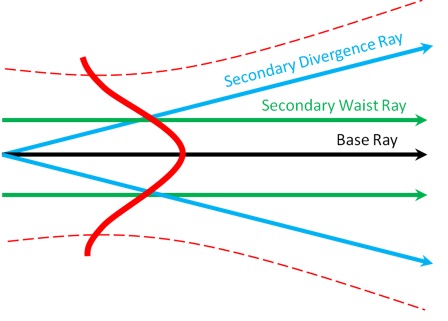 If laser light is brought to a focus at a spatial filter, most base rays in the coherent ray trace will pass through the aperture. This neglects the effect of clipping. To properly model clipping, the light field at the spatial filter plane should be re-sampled within the aperture. A new set of rays is generated for further propagation through the system.

A spatial filtering system is modeled in FRED (Figure 2). Coherent collimated HeNe laser light is created. The source consists of 21 x 21 rays in an elliptical aperture with diameter of 6 mm. The light passes through a plano-convex lens with focal length of 52 mm. A spatial filter is placed at the focal point. Spatial filter diameter (14 µm) is calculated based on lens focal length and beam diameter:

The spatial filter pinhole is created by adding FRED’s Custom Element object type and is described by a Circular Arc curve with radius of 0.007 mm. A 1×1 mm absorbing plane was created at the spatial filter position. An Analysis Surface (64 x 64 µm width, 257 x 257 pixels) is assigned to this plane to collect the light field. After plotting the light field, the user needs to right-click and select Coherent Field Operations / Apply Clipping to Field, selecting the already created clipping curve. The field is now appropriately clipped (Figure 3). 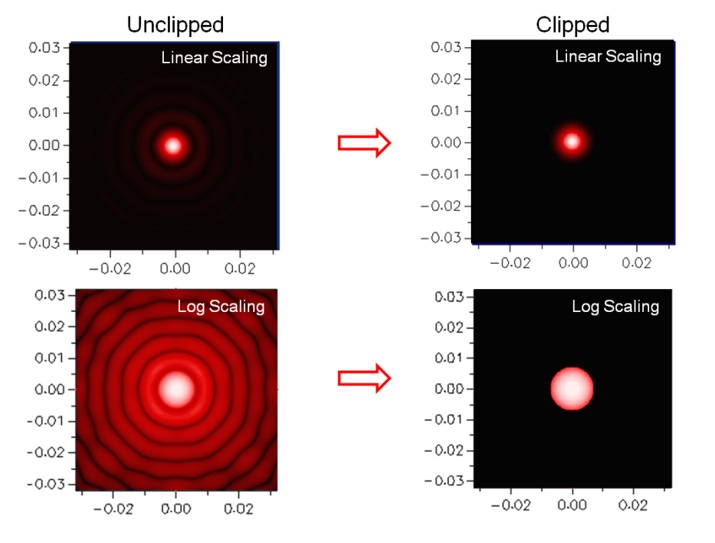 Figure 3. The result of clipping the light field within the spatial filter aperture.

Finally, a new set of complex rays should be generated within the clipped region. This is accomplished using Gabor decomposition. In the plot of the clipped field, the user needs to right-click and select Coherent Field Operations / Synthesize Field. Coherent field synthesis parameters are shown in Figure 4.

The final step is to select “Trace Existing” to model light propagation beyond the spatial filter. Figure 5 shows the irradiance distribution beyond the collimating lens with field synthesis compared to a distribution that neglects spatial filter clipping. It is clear that field synthesis accurately models the reduced beam diameter and expected diffraction characteristics. 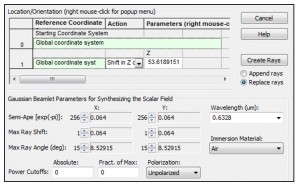 Figure 4. Coherent field synthesis parameters. Gabor decomposition is a directional synthesis which requires maximum beamlet semi-aperture. Maximum ray shift is set to 1 to ensure beam overlap. Maximum ray angle is determined by the diameter of the next optic. In this case, the collimating lens requires a maximum angle of at least 8°.

Figure 5. Irradiance distribution beyond the collimating lens. Left: The light field has been properly resynthesized within the spatial filter. Right: without field synthesis, all complex rays pass through the spatial filter unobstructed and clipping is ignored.

FRED has the capability to model coherent wave propagation using Gaussian beamlet propagation. While this approach is appropriate for free-space propagation of light, optical components that clip the beam should be treated with care. Very small apertures such as spatial filters require a resynthesis of the light field to accurately model clipping of the beam. Using a simple example, Gabor decomposition has been demonstrated to properly model the effect of using a spatial filter in a laser system. Additional applications for Gabor decomposition include the use of a spatial filter with a mixed-mode beam, monochromator slit apertures, and Young’s slit/pinhole interferometers.

The associated FRED file can be downloaded from our Knowledge Base.

Photon Engineering uses cookies to optimize the technical features of our website.AcceptPolicy